I used to be such a voracious reader, devouring hundreds of books a year every year for as long as I can remember. There was just something about the escapism I couldn’t resist; visiting new places, meeting new people, meeting people who were like me and were experiencing the same problems I was, meeting people completely unlike me and having my eyes opened to a whole new world of experiences.

It didn’t matter what I was in the mood for, there was always a story out there to sate my hunger.

And then… I just stopped. I think sometime around the time I started backpacking almost six years ago now. I was focused more on living in the present than in fiction, and any downtime I had was used to finish writing my own novel.

It made sense at the time, but since publishing The Ridge, and its sequel Inyoni Rocks, I haven’t gotten back into reading (or writing) the way I thought I would. And I couldn’t figure out why I was so out of touch with the one thing that kept me going all the way through my childhood.

And then I came across a really enlightening post the other day that basically summed it up for me:

…anyone else grow up and realise that your excessive reading as a child was actually just a coping mechanism for your incredibly shitty childhood and you stopped reading as much as soon as you escaped or found other things to fill the void?” – @SpookyAnarchist

Wow. Feeling attacked much? But then, it’s always nice to know you’re not alone, and that the books you escaped into—whilst exactly what I needed at the time—are not what I should be reading now. Because I’ve grown up. My tastes have changed. The issues I had growing up are maybe not the issues I’m dealing with now. And that’s okay.

And so… a challenge!

I found the 2020 A-Z Reading Challenge, hosted by Ginger Mom & Company through a blog of a blog and thought: What better a way to get back into reading than by attempting a fairly simplistic reading challenge? No pressure, no ties, just aim to read a book per letter of the alphabet. I’d already challenged myself to read more books this year, I think I was aiming for 12, so this is… over double that. But still, I think, doable.

And because I’m a few months late to the game, I will be including books I’ve already read this year, and probably-maybe also books I’ve re-read this year (because sometimes nostalgia is all I’m in the mood for). 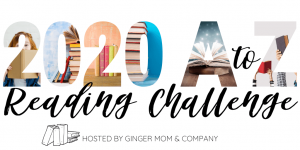 I
– Imaginary Friend by Stephen Chbosky
– Imprudence by Gail Carriger

U
– the Universe vs Alex Woods by Gavin Extense

**Italicised books have been recommended to me, either here or on FB, or are already on my TBR <33

If you’re thinking about taking part, please let me know!
How many books have you read so far in 2020? How many do you wanna read?
And, if you have any book recommendations for me, I will love you forever!