Bay of Islands: Arriving in Paihia

I lasted a week in Auckland after arriving in New Zealand before managing to convince my travel companion to book a tour bus pass with me. In a toss up between Stray and Kiwi Experience, we were sold on the Stray bus and their ‘off the beaten track’ motto, especially considering they visited more out of the way places than Kiwi offered, which was exactly what we were looking for: we came to New Zealand to see the country, the hidden away spots, not just the tourist destinations.

A week after purchasing our passes, we booked onto the Stray bus heading up to the Northland of New Zealand where we planned to stay for a few days in Paihia, also known as ‘the gateway to the Bay’. Paihia is the main tourist destination for anyone travelling to the Bay of Islands with most day trips and sightseeing opportunities leaving from this small seaside town.

Thinking about joining Stray?
Want $50 off your Stray pass?
Comment for my unique StrayMates code!
nb: I do not receive anything for referring you
this is just out of the goodness of my own heart!

It was late afternoon, muggy and drizzly by the time we arrived in Paihia on the 6th May 2014. But, having come from another miserable British winter only a fortnight prior we didn’t let the weather dampen our spirits! After booking some day trips for our next few days and checking into our hostel for the night we spent some time exploring the admittedly very small town and the stunning strip of beach which was pretty much on our doorstep.

Paihia is a very scenic town with some great walking tracks and nearby points of interest (such as the Waitangi Treaty Grounds & the Haruru Falls), though as with most of the Bay of Islands, there isn’t much else to do unless you’re willing to fork out for the tours or the many water activities available from the beachfront.

The town is very seasonal as well, and as we were traveling in May we found the area  to be very quiet, with not many opportunities available to us in the evening. Thankfully our hostel (Base Pipi Patch) offered a BBQ dinner the evening we arrived, which we took advantage of, using the time to get to know some of our fellow travellers. 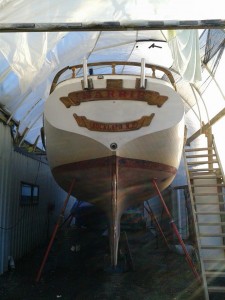 I also used took the opportunity that afternoon to phone a contact I’d been given by a guy I’d met in our hostel in Auckland regarding some work going in the nearby settlement of Opua. I know, I know, it already sounds like the prelude to a horror movie! But sometimes you have to take a chance when travelling, and the guy I’d met in the hostel actually worked for Fullers (the ferry company) and was only staying a few days in Auckland to cover a particularly busy spell.

The contact information was for a friend of his who was looking for people to work for accommodation (basically you work 4-6hrs a day and are provided with all meals and accommodation for the length of your stay). The work was on her boat which was dry docked and needed sanding and fairing to get it seaworthy for the summer. And after meeting her we decided to go ahead with the work and thus extended our stay in the Bay of Islands by a further three weeks!

It was a pretty great experience, not just getting to work on something so completely different to anything I’d ever done before (or ever imagined doing!), but because we got to live on the same boat we were working on (that was definitely a first!), and got to explore so much more of the surrounding area than we would have otherwise, such the Haruru Falls and the Waitangi Treaty Grounds where the Treaty of Waitangi/Te Tiriti o Waitangi was first signed. There’s so much history to both the location and the signing of the treaty, and well worth the visit.

We were guided around by a Māori man who, during our tour, was being restlessly pursued by a piwakawaka (fantail bird). He told us that this bird had been following him for the last three days at that it was a symbol in Māori culture. Apparently, the bird behaving in this way was a message from the gods. Either it was bringing death (to him) or someone close to him was soon to die! A little morbid, maybe, but he didn’t seem too fussed about it

As for the Stray Bus, two of the activities we purchased in addition to our Bay of Islands package were a trip up to Cape Reinga and 90Mile Beach, where we went ‘sandboarding’ and nearly got swept out to sea! And also a cruise to ‘Hole in the Wall’, and a visit to the historic town of Russell. But more on that to come eventually!

10 thoughts on “Bay of Islands: Arriving in Paihia”