A month can be a long time, all things considered. And the past thirty days have felt simultaneously eternal and all too brief. Every day was filled with promotion, and stat-checking, and refreshing. My campaign was always on my mind. When I wasn’t online, I was thinking about it. When I was online, I was talking about it and trying to find new ways to promote it. It was never ending. I feel like all I’ve done is eat, sleep and breathe my Kindle Scout campaign every single day for the past thirty days.

And now it’s all over.

Thirty days gone in what suddenly feels like the blink of an eye.

How could it have gone by so quickly?

And what do I do now?

I remember clicking on my Kindle Scout campaign page to check my stats and suddenly it was suddenly telling me my campaign had ended and that my novel was in review. My heart stopped. I just stared at the page.

Over? Already? I wasn’t prepared for that. I needed more time! Had I done enough? Promoted enough? Was there more I should have- could have?– done?

And then I blinked. Stared at the page a little more. And then I felt this overwhelming sense of relief. As if I could suddenly breathe again. It was over. I was done. There was literally nothing else I could do to try and get my story out there. It was out of my hands now. And that, my friends, was quite possibly the best I’d felt throughout my Kindle Scout campaign!

(well, excepting the times I made it onto the Hot&Trending list of course!)

I went back to promoting the life out of my Kindle Scout campaign this week (as my poor facebook friends can attest to!) and it seems to have paid off with pretty high peeks in views on a few key days.

February 6th in particular saw me spike to 57 views and I made it into Hot&Trending for four hours that day, which after two weeks of mediocre viewings was all kinds of exciting! This date in particular I know was down to my social media promotions because this was the day I restarted them after my lackluster attempts during week three.

I now further believe that giving them a break for week three was a good idea, because I wasn’t getting all that much traffic from them until I refrained from posting for a few days. I also used the downtime to ascertain which of my social media sites were actually preforming for me and focused on those ones more than the others.

The spikes from the 9-11th were down to both my social media as well as the fact I’d now gone onto the ‘Ending Soon’ list. This means that my book was listed on the front page of the Kindle Scout website irregardless of my Hot&Trending status, and it definitely helped.

Most Kindle Scouters don’t really take the time to trawl through the categories to find the stories that have been posted more than a week prior, and I believe most of them only check the front page whenever they do check the site- which explains why most of the books in the Ending Soon list also end up in the Hot&Trending.

It’s soft of like dangling the carrot in front of the horse. If you can’t see the carrot, you might not be inclined to go looking for it! 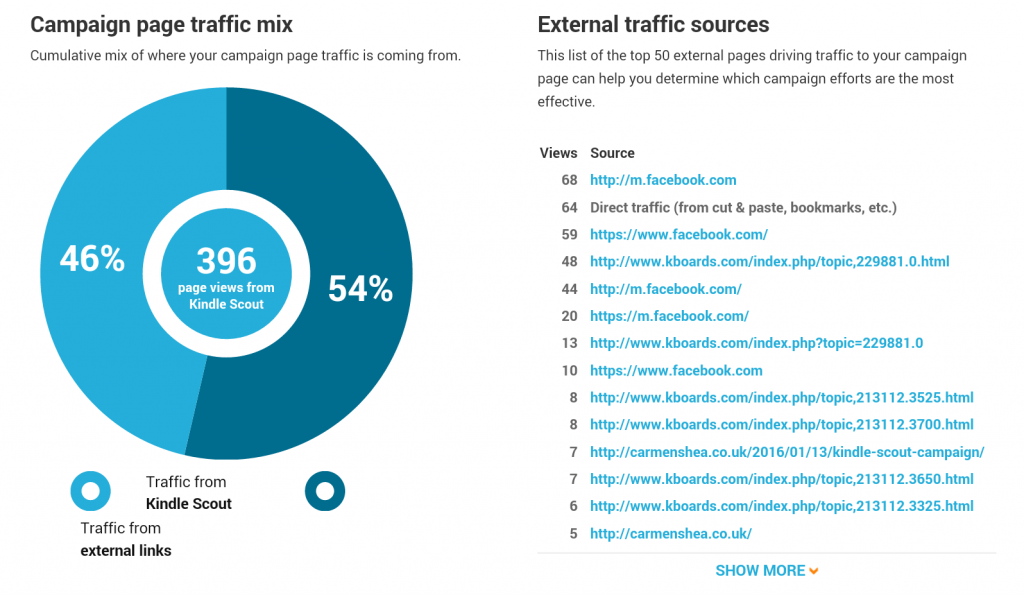 As a result of being on the “ending soon” list, the split of traffic to my campaign page started to even out a bit more with direct traffic from Kindle Scout rising from 36% to 45% over last week, which is a great thing to see as it means more people than just those I’ve been referring have checked out my campaign.

In the end I had 850+ views to my campaign page, and I’m hoping that at least half of those views resulted in a vote. Either way my campaign goes, that’s a lot of potential readers I hope will still be interested in my novel should I go on to self-publish.

Do I think Kindle Scout will option me for that publishing contract?

Not really. I know I have a good story, but I don’t think it’s the sort of story they’re looking for. My decision not to publish through a traditional publisher was because my novel doesn’t conform to most of the genres the publishing houses are looking for, and I feel like Kindle Scout may sway the same way.

And though I’d dearly love to get a contact through them, at the end of the day I joined Kindle Scout for the exposure, for the chance to promote my novel for the month and see if I could gain a bit of a following. Because at the end of the day, my story will still be published. It doesn’t matter how I end up doing it. My one goal in life has always been to be a published author and this dream is coming true, one way or another in 2016.

I want to end this by saying a huge THANK YOU to everyone who took the time to vote for me. To everyone who liked my posts, put up with my spam, kept positive and encouraging when I wasn’t feeling either of those things- THANK YOU! You guys have been the absolute best and I cannot thank you enough for your continued support.

I’ll find out anytime within the next two weeks (along with everyone else who voted!), so until then that’s all from me! I’ll be spending the time doing a final review of my novel and ensuring it’s good to go by the time I hear back from Kindle Scout!

All of the thanks,
— Carmen-Shea 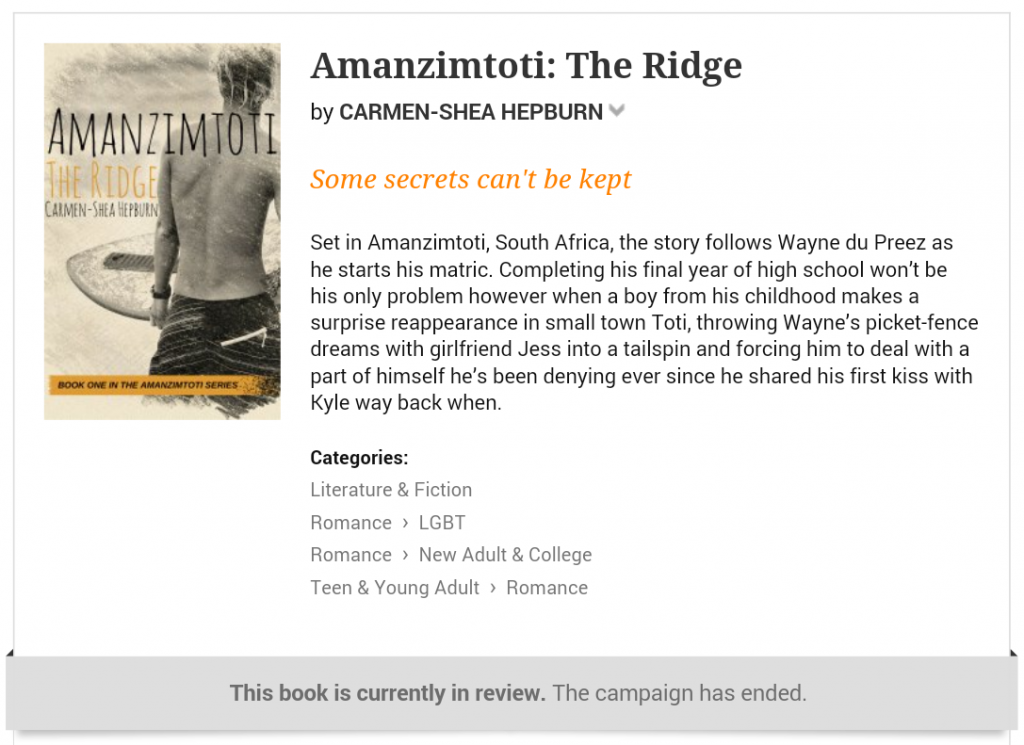