Despite “theme-ing” my week, we ended up straying from the meal plan quite a bit. I’ve realised that moving meals around the week isn’t as bad as I make it out to be. I always feel like I’m letting myself or the plan down when I have to change things, especially if it’s because I’m ‘just not feeling it‘ one particular night.

Looking at it from another perspective, however: I’m still using up the ingredients I have, we’re still doing a grocery shop based on the pre-planned meals for that week, and we’re not spending any extra money on take-aways. That’s got to be a win at the end of the day. Anything that doesn’t get eaten, gets frozen. And our ‘un-planned’ meals tend to be cheap (like pasta) and use up ingredients we already have lying around that I haven’t yet planned a meal around (like anything frozen).

Changing my mindset on this one pain-point, is making me more motivated to continue posting my meal plans, and to be less hard on myself when we deviate from those plans! 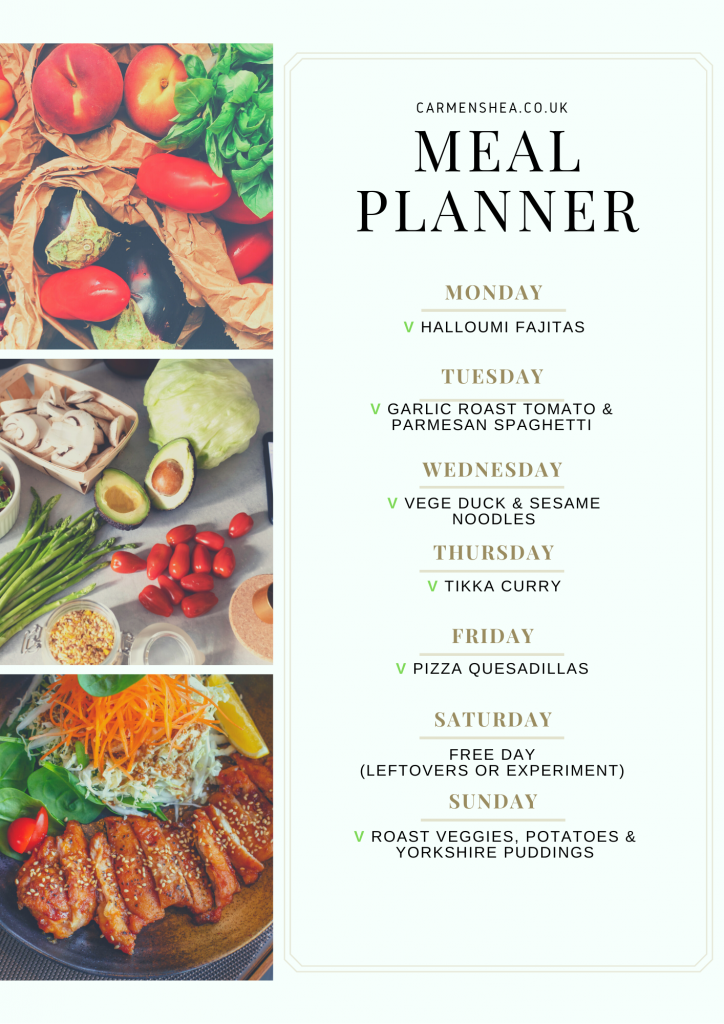 Tuesday – V DIY Dinner
We kind of lost track of time today and it was almost 9pm by the time we realised we still hadn’t had any dinner. I wasn’t actually hungry at all and J wasn’t fussed on me making my intended meal so he whipped up his own version of the Backpackers Pasta (which basically includes a lot of tomato puree!).

Thursday – V  Pizza Quesadillas
We ended up moving Friday’s Quesadillas to Thursday as I’d forgotten to take the Tikka I’d made previously out of the freezer. Rookie error, I know! But the wraps were beginning to get a little stale around the edges anyway, so it turned out to be a good thing!

Friday – V  Fish Fingers & Chips
As we’d already had the Quesadillas, I ended up raiding the freezer for anything still needing to be used up, as we’d decided to try our grocery shop at 9pm on the Friday night, which proved to be a great success. We worried everything would be gone by that time, but were willing to chance it in the hopes there’d be less people. There were definitely less people, but they also had everything we wanted (including flour!), and more. In regards to dinner, I managed to scrounge up a rather unhealthy (and un-vegetarian? Does fish count?) Fish Fingers & Chips, instead. I’m not a big fan of fish so mostly just had chips for dinner instead.

Saturday – V Leftovers: Tikka Curry & Naan Bread
I remembered to take the Tikka out the freezer the night before! Yaaay, happy dance! We’d ended up grabbing some pre-made garlic naan bread last night during our grocery shop to go with the curry. It wasn’t very garlicy tasting but it did the job.

Sunday – V Toad in the Hole
Since getting fresh flour, I offered J the choice between a roast dinner with Yorkshire Puddings, or a Toad in the Hole (with Plant Chef Cumberland Style Vegan Sausages), with a broccoli mash. You should have seen his eyes light up at the thought of a toad in the hole!

Which is funny because the last time I attempted to make it, back when we first got together, it was a complete disaster with the mix not rising at all and being all stodgy and half-cooked on the inside. Blergh!

I’m happy to report it was a complete success this time round! J asked me what I’d done differently for it to be so completely different from my first attempt. My reply? I have absolutely no idea!

But hey, at least I ended the week on a win!

How about you? Any win’s this week?