This week was a ‘use up all the food in the freezer‘ kind of week, as we’ve had a few things hanging around since before the lockdown started that really needed to be used up, along with some potatoes and wraps.

I mentioned last week that J and I were trying to go more veggie with our diets, and you’ll see as a result of that, most of the stuff in our freezer was ‘veggie-equivalent’ meals that we bought to try out! XD 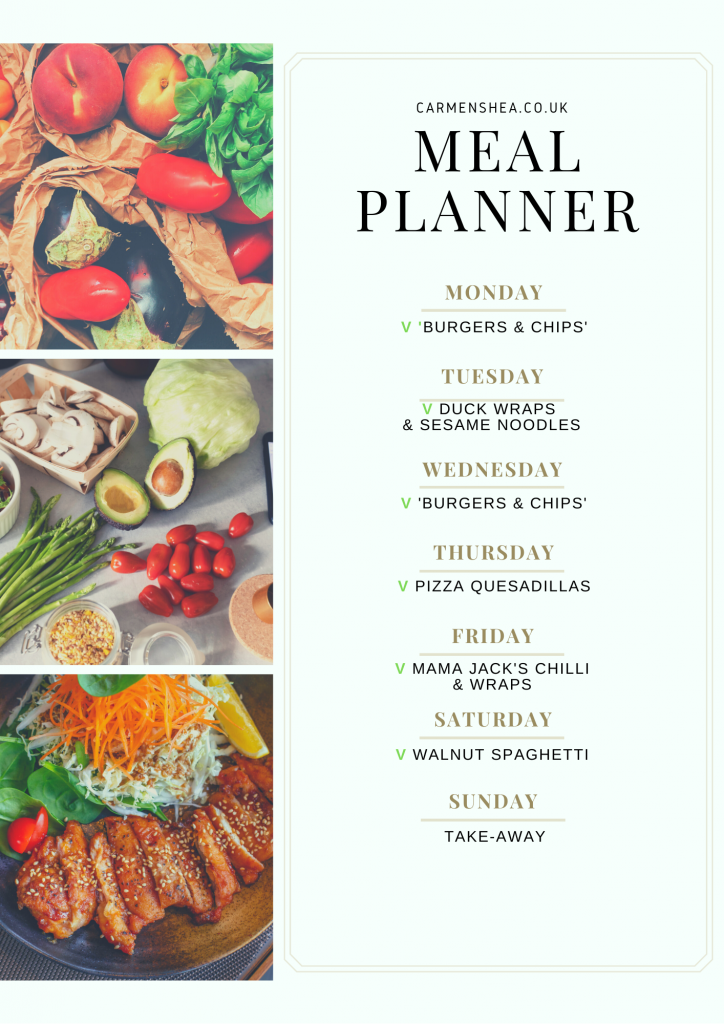 The first of the veggie-equivalent meals was a ‘meat-free’ burger (soy bean, I believe), with Broccoli and Purple Carrot Bites. The burgers were Bird’s Eye Green Cuisine, and omg they were so good! We almost couldn’t tell we weren’t eating meat. We had them as cheeseburgers, and I toasted the burger buns- lightly brushed with oil and sprinkled on top with salt and pepper. I also added raw onion to mine as I like a bit of a crunch.

The Bites were by ‘Stong Roots’ and whilst J loved them, I thought they were too… weird. The outside got perfectly crisp in the oven, but I don’t know if they had just been in the freezer too long, but I found the insides soggy and bland. So unless J wants otherwise, I probably won’t be getting those again.

We used to love eating duck! To a point where we’d get and cook an entire one and use it up in stirfrys and things over the course of a week. Unfortunately J has a poultry allergy that affects him when he eats white meats like chicken and turkey. The saddest day of our lives was when he started having the same allergic reaction to duck one night (I still believe it was the Chinese Five Spice I decided to try to crisp the skin up). Since then he’s refused to eat duck again and to make it easier for him I gave it up too.

And then I discovered Linda McCartney’s Vegetarian Shredded Hoison Duck and OMG you guys, it tastes exactly like the real thing! The smell when we started cooking it was absolutely devine and by the time we’d finished cooking we couldn’t be bothered having it in wraps so we just added it directly to the Sesame Noodles we’d already whipped up. More of this, please!

Today’s Burger and Chips was brought to you by Strong Roots ‘Kale and Quinoa Burgers’. I think, a bit like the Bites on Monday, they suffered a little bit from being in our freezer just a tad too long: Though crisp on the outside, they were a little ‘soggy’ on the inside, but the flavour was actually really good so I’d definitely consider trying them again. You know. For research purposes.

Our chips this time were a sort of roast-potato-wedges kind of thing. We had potatoes that needed to be used up so I roughly chopped them into small bites and roasted them for around 40-50 minutes with oil, salt and pepper, and some Italian herbs- absolute success!

Though sealed in an air-tight bag, we had a packed of wraps dated best before last month that had to be used up. I planned two ‘wrap’ meals one after the other to ensure none of them went to waste.

These would have gone down as Vegetarian, as it’s literally just tomato puree and cheese put onto a wrap, folded in half and then toasted in a pan (lightly brush with oil and season the outside with salt & pepper), but we also had a pack of sandwich ham to use up so we added some to our wraps too.

I can’t exactly remember why we deviated from the plan, but I think because we’re not really doing much/using enough energy, neither of us wanted a heavy meal by the time it came to cooking dinner.

As the wraps had to be finished today however, we agreed to just have the Pizza Quesadillas again. This time mine was Veggie as I didn’t want any ham, but J thought it tasted too good last night so opted to use the rest of the ham in his.

I’d forgotten all about my sweet potatoes* :/ I’m not sure how long we had them for, and I’d hate to speculate, but I’m pretty sure if they didn’t kill you by eating them, they’d kill you with blunt force trauma they’d petrified that much. Eugh. Annoyed at myself for not having kept more on top of them we opted for my favourite comfort food, Backpackers Pasta, instead!

*It’s called a walnut spaghetti, but the main ingredient is sweet potato.

So! This was totally planned and budgeted for, hence it’s still in the ‘green’. We decided to celebrate a little bit on Sunday, as we’ve now been together 2 years and 8 months, and the restaurant where we had our first date has recently reopened for delivery only: Five Guys!

Now here’s the funny thing. After having ‘burgers’ all week, and as amazing as Five Guys is, J and I came to the same realisation that as much as we’d missed them, we’d actually preferred the veggie burgers we’d been making at home all week.

Even funnier than this? I’d been thinking that if J changed his mind and didn’t want to order take-away after all I’d be happy to skip them. And J said he’d been thinking the exact same thing but had been waiting for me to say something XD haha.

Funny how things work out in the end. Still, it was probably good to give them a go now when we’re really excited about our ‘meat-free’ meals, means we’re more likely to stick with them than to go back to our ‘old’ eating habits.

How’d you all get on with your meal plans last week? Try anything new and exciting?