I teased you all last week that J was making us a mince-free Bolognese, and I have to say it was a real treat!

We have quite a few Vegetarian friends who could easily whip up something like this without batting an eyelid, but for J and I? Well, we’re still in the early stages of our meat-free journey. We’re not fully committed to going Vegetarian yet, we’re just having fun finding new ways to make our favourite foods.

Before I get into what his mince-free Bolognese actually consisted off, here is the meal plan we were working from last week: 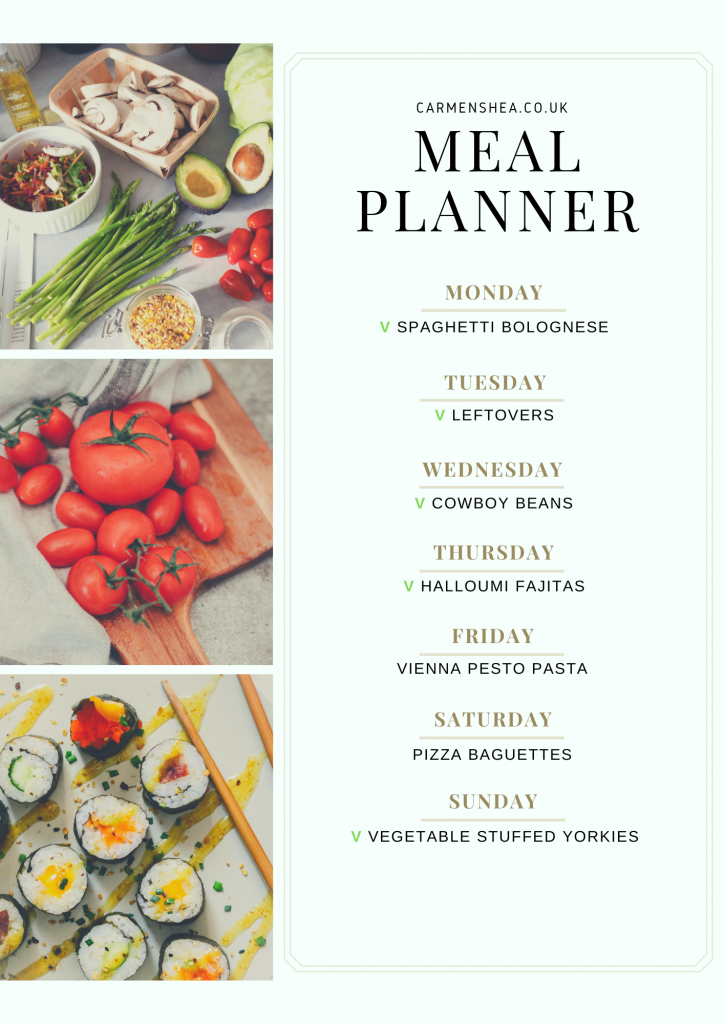 The last time I posted about my meal plans was back in June last year. And almost a year later, it seems we are still unable to follow through with an entire plan! XD

Monday – V Mince-Free Bolognese
I’m sure there are more exciting ways to make something like this, but J was really hankering for a Bolognese and, as previously mentioned, we didn’t have any mince in the freezer (tbh we haven’t bought mince for months now, which neither of us are exactly complaining about).

But the question then becomes, how to make a bolognese without mince? The answer? Backpacker style! We had a tin of green lentils in the cupboard and a bag of mixed vegetables (the kind with carrots and green beans, etc). He mixed it all together with jar sauce* and voila, we had ourselves a bolognese!

*Now that our local Tesco has a plethora of fresh produce back in stock (and a distinct lack of jar sauces!), I’ve convinced J to try his hand at making the sauce from scratch instead of going for the jar sauces 😉 he’s well on board after seeing how easy it can be!

What exactly are cowboy beans? Simply put, it’s baked beans with whatever else you want to throw into the pot. This time, I used three kinds of beans: baked, kidney and black. Added onion, chopped tomatoes and peppers. We also roasted two baked potatoes to have with them.

As it turned out, by the time I’d finished cooking everything, neither of us was particularly hungry and we ended up skipping dinner altogether. /facepalm.

And thus, we ended up having Wednesday’s dinner on Thursday instead.

Which, in turn, meant we had the leftovers on Friday. However, as I’d added a bit of spice to the Cowboy Beans, they actually ended up making a really nice ‘chilli’ and we finished it off with some cheesy nachos.

I ended up having horrendous allergies all day Saturday, to the point where I had to go back to bed for a few hours to sleep off the worst of it. Least to say I was lethargic and mopey the rest of the day and J was kind enough to make me one of my favourite comfort foods: Backpacker Pasta.

Whilst we love a roast dinner, it does take a while to make one from scratch. My cheat is to roast all the vegetables and potatoes I would usually have with a roast together for around 30 minutes with oil, salt and pepper. Whilst this is cooking, I’ll whip up a batch of Yorkshire pudding mix (I like this one from Jamie Oliver).

When everything is ready, cut open the top of the Yorkies and stuff them with your roast vegies. Add gravy or tomato ketchup as preferred. Yummy!

So, as you can see we managed three of seven days with the meal plan. The days we didn’t follow the plan, however, aren’t a problem as we still prepared our meals at home and didn’t spend any additional money.

I don’t know about you, but I count that as a win!