I can hardly believe we’ve passed through the first week of June already! I had pretty big plans for this month in terms of budgeting and meal planning and within the first few days not only did I completely disregard both of those things, but I ended up spending money I was going to put into paying off my debt into buying some “emergency” jeans for J, a spontaneous date-day and a damned take-away. Ugh.

This is what my meal plan was supposed to be for last week: 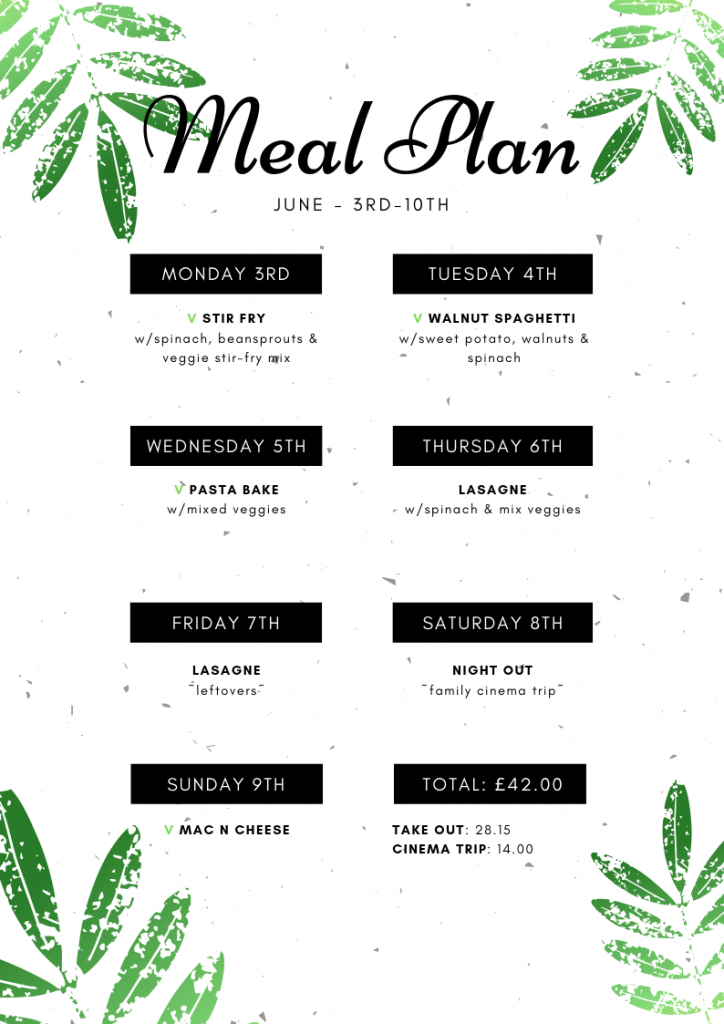 And this is what we actually ended up doing last week:
(Using the traffic light system for ‘Nailed it!’, ‘Well… at least we didn’t spend any money!‘, and ‘Gross sobbing‘)

MONDAY
What actually happened is that J’s Nintendo Switch* arrived on Monday morning and he ended up setting it up before work so didn’t make stir-fry for his lunch/my dinner. Not wanting to ‘waste’ a portion if I made it myself I ended up having what we like to call ‘snacky foods’, which is basically a random selection of freezer foods. My dinner ended up being a handful of chicken nuggets and a frozen Greggs cheesy-bean pasty. Yummy!
*Through our work we’re signed up with Virgin Pulse, which is an initiative to get workers moving. The more steps you do, the more points you earn. The more points you earn, the more you can ‘buy’ with them. It’s effectively free money. My points got us a Playstation Pro earlier this year, and J spent his points on the Nintendo Switch.

TUESDAY
I was all geared up when I got home. I cracked on with washing the dishes we’d left from the weekend (I was very good and made a roast ham dinner with yorkshire puddings and broccoli), cleaning the kitchen and putting on a load of washing. By the time J got home about an hour later– our plan was to make the stir-fry from Monday– we were both absolutely famished and, to my shame, when J said “Five Guys?” I said “If you were to go ahead and order it without telling me, I don’t suppose I could really say no, could I?” Two guesses what J did. I hate myself sometimes. .

WEDNESDAY
We were both on lates and, obviously not having made dinner the night before, I also didn’t prep dinner for this night. I did, however, make us take sandwiches to work. My bread was so close to being stale it was really quite shameful but you bet your arse I ate those marmite-and-cheese sarnies! I did also use a “Coffee and Cake” card to get a large chai hot chocolate and a chocolate chip muffin from our in-house Starbucks.
*The C&C card is an incentive reward from management at work, so in effect it’s a freebie. The best part was that they not only gave me my items, but they also gave me the card back to use again!

THURSDAY
We were so good today! We had the day off so J made a lasagne and whilst he was doing that I made a pasta bake, as I refused to go out and spend money on bread and ham for lunches until next week (and maybe not even then if I can help it!). This gives us x6 portions lasagne (not including the x2 portions we had for dinner), and x5 portions pasta bake to play with.

FRIDAY
We’re working late, again :/ but instead of the lasagne, we opted to take x2 portions of the pasta bake for lunch-dinner. I used up the last of the ham in the fridge for it too.

SATURDAY
Though planned (sort-of), we definitely didn’t have the pennies to be eating out again. Unfortunately, being at work all day– starting early after the lates the night before, ugh– we also didn’t have the time to pre-prep anything, and certainly nothing that was going to feed (and satisfy) upwards of five people… or so I thought! I had a chat with J and we let his family know to eat before the movie and that we’d be having left-overs. So, of course, what actually happened was everyone ate before the film but by the time we’d rushed over straight from work we were absolutely famished and spent £14 on cinema snacks. Head, meet desk.

As I’ve said before. It’s all a learning curve. I need to be stricter with myself and actually stick to these meal plans as much as possible. The only saving grace is that I’m still using up food we have in the house (you know, when I actually make the meals I’m supposed to).

So for this next week I’m going to follow my own Meal Plan 101 advice to the letter. Yesterday I went through all the food we have in the flat, and my aim is to meal plan us through this next week with food we already have. I will have to go out and buy some lunch-stuff to get us through the work week but aside from that we should be good money-wise till pay-day on the 15th.