Wow. Talk about your not following a meal plan! My word. I was actually really excited for last week’s meals and yet… we didn’t end up having a single planned meal. Like not even a little.

I’m not even entirely sure why! Though I guess some of it was down to forgetting to take some things out of the freezer to defrost, and others it was a case of coming home from work but not actually being hungry enough for ‘proper food’. Le sigh. Still, on the plus side, we only spent what we’d budgeted for, so that’s something!

Anywho, here’s what we had planned: 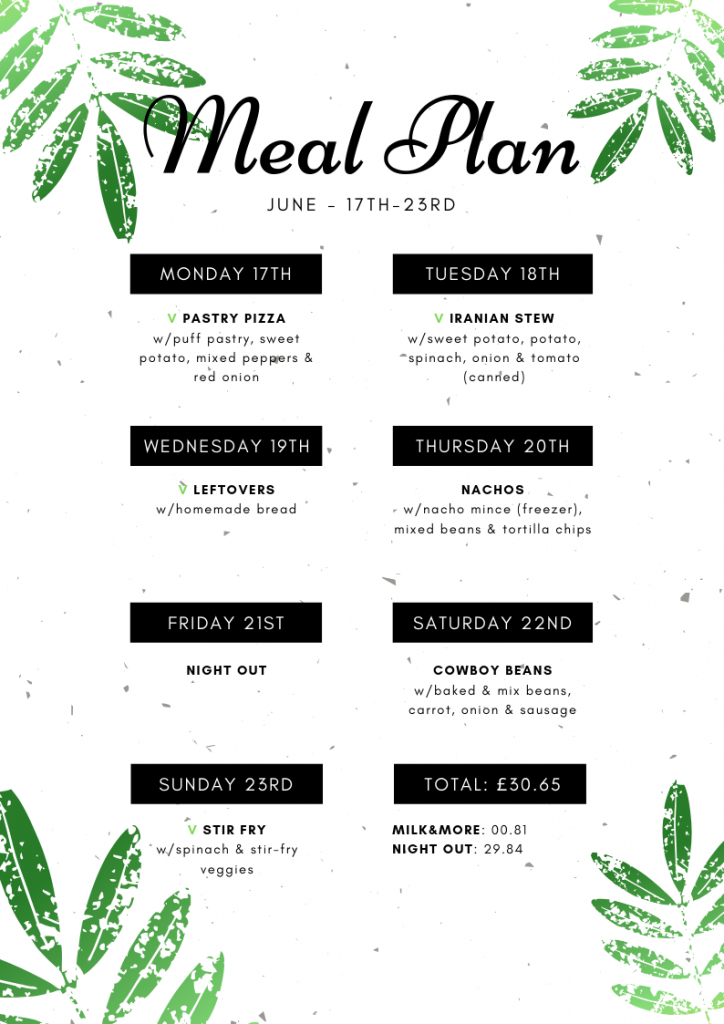 And here’s what we actually ended up having
(Key: ‘Nailed it!’, ‘Well… at least we didn’t spend any money!‘, ‘Gross sobbing‘, and ‘This was totally planned for… honest!‘)

MONDAY
We legit cannot remember what we had Monday night. I can tell you it definitely wasn’t pastry pizza because I’d forgotten to take the pastry out of the freezer. I can also tell you it was something in a bowl as I distinctly remember eating it whilst posting last weeks meal plan, but honestly it could range from cereal to a stir-fry. I do know it came from what we already have in the flat so I guess it could be worse!

TUESDAY
We had one of those ‘rollercoaster’ days where we were both a little moody and going from up-to-down like yo-yos. J had the start of a really bad head-cold and Mother Nature decided to turn up two days early for me. By the time we got to the evening we’d decided to just have ham-and-cheese toasties instead of proper food.

WEDNESDAY
Mac’n’cheese. Having not made the stew the night before, there were obviously no leftovers to have tonight. J ended up taking the next few days off work to recover so we decided to have something a bit easier/softer for him.

FRIDAY
We had a planned night out to go to, just a couple drinks to celebrate a friend’s engagement, but J still wasn’t up to leaving the flat so we decided to spend the going out money on a take-away instead. At least when you order Papa Johns there’s enough to do two lots of dinner!

SUNDAY
We ended up having a Gregg’s pastry from the freezer and vegetable fries.

MILK&MORE
We had a slight drama with out first ever milk delivery in that it… wasn’t delivered :/ I waited till around 10am before calling them just in case, but as deliveries are supposed to be made by 7am, I wasn’t exactly confident they were just running late. Spoke to a very helpful lady who found out that our address hadn’t copied over properly to the supplier and that’d she’d get in touch with them and phone me back.

I ended up having to pop out for some groceries and whilst out got an email regarding a refund for the milk so I picked up some milk and started off home, only to then get a phone call telling me they were on their way with today’s milk! To be honest, 1pt of milk is defo not going to be enough for us so it was probably a good thing I picked up some- especially as I used quite a bit in the mac’n’cheese.

I’ve upped our order frequency to three times a week from next week and we’re going to see how that goes, but I’m pretty sure we’re going to have to up how much we get per delivery :/ which… doesn’t exactly save us any money but hopefully the planet will thank us for going plastic-free!

All in all, not the greatest week for us in terms of sticking to the plan! But additionally not the worst week we’ve had. Just means there’s more exciting things I can look forward to making this week.

How did this last week go for you? Hopefully better than mine!