It started out so beautifully… 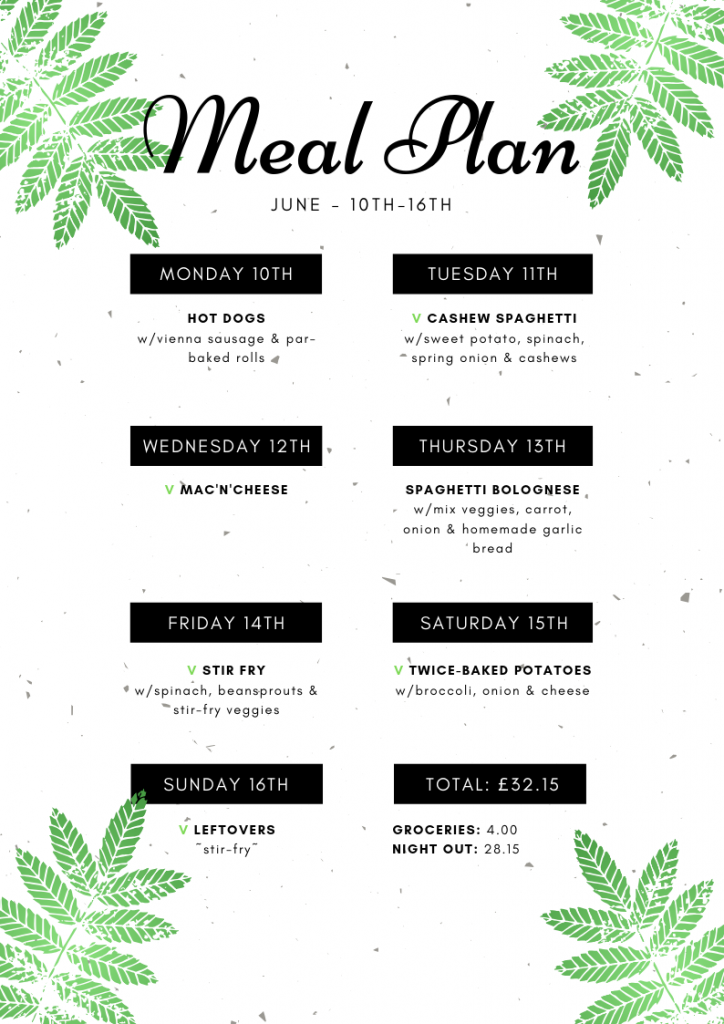 (Using the traffic light system for ‘Nailed it!’, ‘Well… at least we didn’t spend any money!‘, and ‘Gross sobbing‘)

Monday
Used up the last of our part-baked rolls and ‘fake’ cheese slices to make hotdogs.

Tuesday
The only change to this was that I didn’t add spinach, choosing to use mixed peppers instead.
*The featured image for this post is the meal just before spaghetti was added!

Wednesday
I made mac’n’cheese! Now, I SUCK at making a cheese sauce. Honestly. I’ve wasted so many ingredients trying to get it just right and though J has eaten every attempt (and sworn they all tasted good), it’s still the one thing I fail miserably at. Knowing this, I usually cop out and make my backpackers mac’n’cheese*, but last month I picked up cheese sauce mix which are granules you add to water or milk (I used milk) and voila! you have instant cheese sauce! I cannot believe how easy it was and could actually cry that wasn’t in my life before now. I foresee us eating a LOT more mac’n’cheese in the future!
*Backpackers mac’n’cheese: pasta with butter, salt & pepper, and cheese grated on top.

Thursday
I tried making bread for the first time in my life this week… and it wasn’t an entirely horrendous experience! I grabbed a recipe for 1hour bread I found on Pinterest with the intention of making garlic bread to go with the spag bol and whilst the bread itself tasted amazing, it kind of fell apart when trying to cut it so I only managed to make about 5 large slices of garlic bread (J and I may- or may not- have just eaten the rest of it as-is whilst making the spag bol and completely ruining our appetites!).

I’d definitely give it another go, though I do have quite a few bread-making recipes I’m looking at, so might give one of those a go instead. Have you tried making bread at home? Any recipes you swear by? Any horror stories I could learn from?

Friday
We ended up having leftover Spag Bol, after I’d added a mirepoix base of onion and carrot to J’s usual recipe, we ended up with more than we were expecting to- not that either of us were complaining!

Saturday
/cough. In our defence, we’d planned to have a night out this week, and come the end of the day we both agreed we’d have a take away Saturday instead of dinner out Sunday, and just go out for a drink or two instead. It was a good thing we did too as I’d put on a pasta-bake (as we’d run out of cheese so needed a meal that would do for both dinner and lunch the next day) and somehow forgot to turn the oven down after pre-heating it and ended up burning it :/ we still took it in for lunch the next day though /gross sobbing.

Sunday
We ended up making stir-fry as, mentioned above, we’d run out of cheese and it was the quickest and easiest thing to make.

I was so proud of us this week. We were doing so well! Sticking to our meal plan. Even the little blip where we actually had leftovers instead of making a new meal felt like a win… and then… the weekend hit!

To be perfectly honest though, I’d budgeted for the ‘Night Out’, that it ended up being a night in with a take-away isn’t exactly all that unexpected from us… still. Another week done and hopefully less money to be spent going into next week, though I may have to do a proper grocery shop for the weekend just so that we’ve got food in preparation of the following week.

One expense we do have upcoming is for a milk delivery I’ve set up to start next week. We do go through quite a bit of it between breakfast cereals and teas/hot chocolates. After comparing a few, we’ve settled on Milk&More and gone with the glass bottle option because as much as I want to save all the pennies, I kind of also want to save the planet at the same time.

I’ll keep you posted on how we find it!