If I’ve done nothing else this month, at least I can say I’ve done a ton of reading!

I intended to read The Andromeda Strain by Michael Crichton this month, but after finishing a Matthew Reilly novel in April, I had a hankering to re-read my boy Reilly instead.

This month I read:

I’m sure I’ve mentioned it before, but I’d somehow missed a book in Reilly’s Jack West Jr series of novels, having read the first two then, years later, the fourth without realising I’d skipped the third until half-way through the fourth when they started referencing things I didn’t remember!

In my defence, he introduces my absolute favourite character of his (Scarecrow) into this series in the Four Legendary Kingdoms and I think I was so excited by that knowledge that I just didn’t stop to consider if I was up-to-date with the whole series in the first place!

Upon re-reading the series this past month, I’ve since discovered there’s a fifth book already out (see currently reading), and the sixth is due out in October!

I’ve only just started this one, but it’s set directly after the events of book 4. And by directly, I mean poor Jack and co haven’t even had a chance to catch their breaths yet! It’s pretty action-packed, which is standard Reilly, so I look forward to seeing where it goes.

next month I’m Planning to read:

The Andromeda Strain
by Michael Crichton

Yes, it’s still on my list! I’m going to try and refrain from (re)reading any more Reilly novels until I’ve made a bigger dent in my TBR pile!

I’m still taking part in the 2020 A-Z Reading Challenge; which is to read a book per letter of the alphabet over the course of the year. If you’re doing any reading challenges, let me know! Are you just reading a certain quantity of books this year? Reading by theme? Or just want to recommend your favourite book? I’m all ears!

I mentioned last month that I was taking May to work on a new series, with the working series title: The Atlantean Experiments. I expect it to be a three book series and, whilst I didn’t get much in the way of writing done this past month, I managed to research and plan a huge chunk of the series out.

It’s exciting to be this enthralled with an idea to a point where I just want to spend all day and night writing it! …I’m not quite prepared enough for that to happen, but it’s nice that the want is there after being stagnant for so long.

Depending on how well things go this next month, I’m hoping I’ll be able to share either a synopsis for book one, or maybe a little character biography for my MC with you all in my next update.

As I mentioned before, this one is going to be pretty different from my debut series, as I’ll be dipping my toes into the world of Urban Fantasy for the first time. Don’t worry too much though, there’ll still be a healthy (or unhealthy!) dose of the angst and drama you’re all used to! 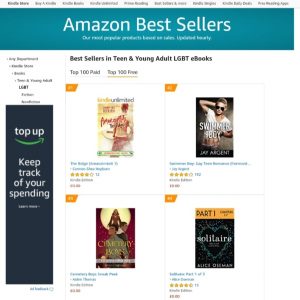 I was absolutely blown away by the response my first novel, The Ridge, received when I put it up for a free 5-day promotion at the start of May!

And I just want to say a huge THANK YOU to everyone who downloaded and shared because you guys got me to the #1 spot on the Amazon Best Sellers list for most of that weekend- what a ride, let me tell you!

Obviously with free promos, I don’t make much/any money by giving the book away for free, and whilst I don’t expect everyone to read it, or to even let me know what they think about it if they do read it, I just wanted to add… If you do read it, and you happen to enjoy it, please consider leaving a review on amazon.

Reviews are one of the best (and sometimes only) ways for authors to gain new readers! And maybe make the equivalent of a a cup of coffee for all our hard work 😉

Returning to Toti after a bleak winter break sees things going from bad to worse for Wayne du Preez. With Kyle still circling him, and Jessica demanding answers, it’s finally left to Travis to offer his best friend an ultimatum that will set the course for the rest of the school year, and indeed, the rest of their lives: “You tell her. Everything. You tell her now, or I will.”

I’ll be running a Free Promotion for the second book in the Amanzimtoti Series, which will go live from around 07:00 GMT June 18th and last for 5 days.

I will post another announcement nearer the time to remind everyone, but at least it gives you plenty of time to read the first book before the second goes on promo!

That’s all for this month’s edition of the Rough Draft, thanks for all the love in May and I can’t wait to catch up with you all next month!