Top 5 things to do IN Auckland

You might have found my previous post on Auckland a bit harsh, but a girl can’t love every place she visits!

However, in an attempt to show there’s no hard feelings towards New Zealand’s largest city, here’s my TOP 5 things to do in the city itself!

Chances are you’re probably going to be flying into this airport when you head on over to New Zealand, and so I just had to include the Dwarf “on load from Middle Earth“, as he stands guard outside the Arrivals Terminal!

For a Lord of the Rings fan especially it’s a welcoming sight. And for you strange people not into Lord of the Rings, it’s still a pretty impressive piece of artwork and highlights the level of skill on offer at the Weta Workshops, which can be visited when in Wellington.

The Harbour front in Auckland is quite possibly the BEST thing about Auckland city. Hands down. I’ve mentioned before that Auckland is a city of shine and grime and it’s not until you get down to the Viaduct that you really get to see the shine this city has to offer.

With stunning views out across the harbour, gorgeous examples of European architecture, and an interesting array of restaurants and bars, you really can’t go wrong down this end of the city!

Whether you want to catch a ferry to the many neighboring islands, or you just want to sit and soak up some sun, this is the place to be!

It also has an interesting walk through with information on Kelly Tarlton himself and his antarctic adventures, done up to look like the inside of his ship and his base of operations.

My personal favourite part was the tunnel aquarium where you can watch as Stingrays and Sharks swim all around you.

Make sure you grab up any brochures you find in hostels or airports, they’ve got loads of discounts for things like this and you can usually get in for half the price advertised if you do! 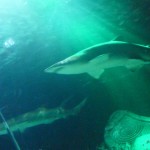 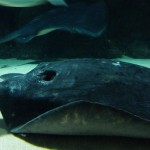 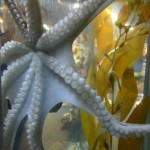 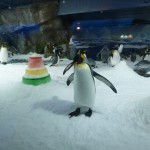 *nb, Check out the feeding times when you go- the Stingray feeding was amazing to watch! And you can also opt to go cage diving or swimming with the Sharks!

Mt Eden is one of Auckland’s 48 volcanic cones, and at around 196m high it’s also the highest! It does offer unobstructed views out across the city which surrounds it on all sides, but it’s really the craters that are the impressive part about Mt Eden.

From Mt Eden you can look over towards One Tree Hill, which is another notable landmark you can visit in the city.

If you’re visiting Mt Eden then catching a game of rugby at Eden Park is simply a must, especially if you’re a rugby fan! The first match I watched was the local Auckland Warriors vs the Wellington Hurricains.

I was lucky enough to get tickets to watch the All Blacks v England game in 2014, and I can’t put into words just how shiver-inducing watching the Haka preformed live in front of me whilst in New Zealand was! Definitely a top experience!

You might have noticed that I’ve left the Auckland Skytower and Harbour Bridge off of this list, and this is simply because I chose to do neither. Both cost money to visit, even if you opt not to do the adrenaline activities, and though they are sold as offering impressive views of the city, as I was not all that enamored with the city itself I thought I’d save myself the money. I can’t imagine that viewing the city from another angle was going to make me appreciate it any more, but it is certainly an option if you have the time and inclination to do so.

Want to get out the city itself? Check out my TOP 5 things to do OUTSIDE of Auckland! I promise, you’ll thank me later 😉