As my time in New Zealand is quickly drawing to a close and I’m beginning to realise that there’s still so much I want to do (even here in Wellington!) I decided to ask my boss if I could do one of the Wild Wellington tours we offer to tick a few items off my New Zealand bucket list!

I want to preface this post by saying that even though I (at the time of posting this) work for the same company that operates this tour, I was not asked to review it, and aside from not having to pay for the tour itself am not receiving anything for my review of it.

Additionally, this post is mostly me flailing over just how awesome Wellington is and berating myself for not having taken the time before now to check out these spectacular locations! Also, it’s particularly photo heavy! 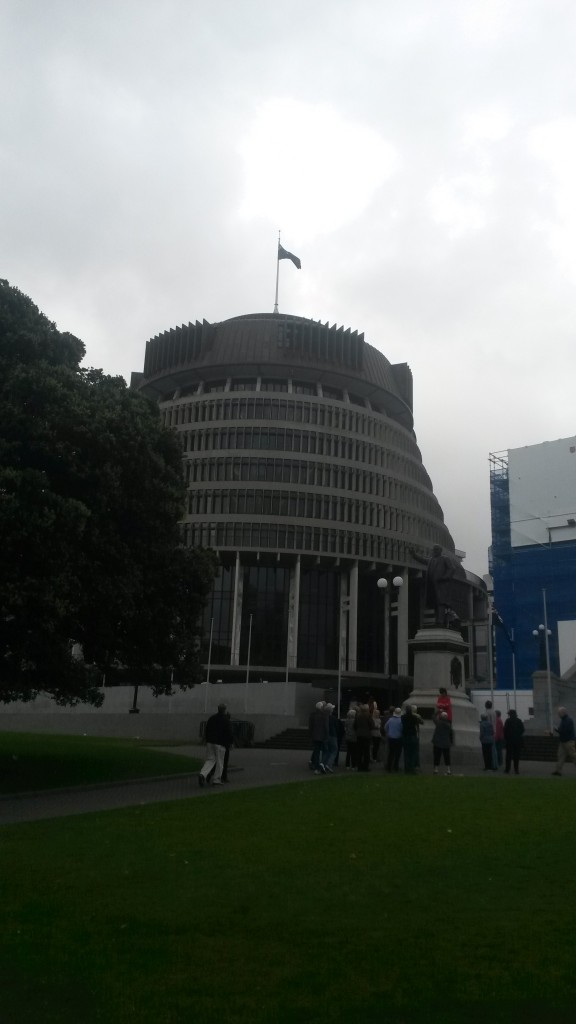 This isn’t technically a part of the tour but our guide was kind enough to offer it as an option to those on the tour who hadn’t yet had a chance to visit this iconic Wellington building.

The “Beehive”, the offices of parliament here in Wellington, was so named for the shape of the building (and not necessarily for the amount of work that gets done!). Its design is typical of 1950-70’s brutalist architecture and was actually voted the third ugliest building in the world in 2009!

Whilst its drab grey design leaves much to be desired, if you instead imagine it as looking a bit like a Dalek (with the flag pole lowering to become the Manipulator Arm, perfect for defending the country against any potential airstrikes!) it suddenly makes a much more interesting picture and… sort of, kind of, starts to grow on you?

The Otari Wiltons Bush is a native botanic garden and forest reserve boasting 100hectares of original and regenerating forest. It is the only botanic garden in the entirety of New Zealand who’s main focus is towards the native plants of the country.  We took a lovely turn about the Circular Walk, getting to check out some of the coastal plants and fern species before reaching the Canopy Walkway, which allowed us to walk amongst the treetops.

For someone who’s spent almost two years living in New Zealand and over eighteen months of that in Wellington itself, I felt a bit bad that I’d never so much as heard of Otari Wiltons Bush before today! Definitely a place I’ll need to check out again whilst I’m still here in Wellington.

Next stop was the Tinakori Lookout which was yet another place I’d never heard of before taking the Wild Wellington tour! (Methinks I need to get out more!). Interestingly enough it’s almost directly opposite the Mt Victoria Lookout, and though it doesn’t boast the same spectacular 360 views of the city, it does give you a different perspective of Wellington and offers an unobstructed view over towards Matiu / Somes Island, which can’t be seen from Mt Vic.

It was super windy at the lookout, with Southerly gusts at around 50kph, which also made it super chilly! Despite the rather dour weather conditions, it was still a pretty great view!

Now, the exciting thing about Terawhiti Station (aside from the fact it hosts the windfarm here in Welligton), is that you can only get onto this farm by taking one of the Flat Earth tours! So the only people you’re likely to see around this working beef and sheep farm is the farmers themselves, turbine technicians and, well, the other people in your tour group. I don’t know about you but I love a little exclusivity!

Terawhiti Station is huge! And our guide told us all about the history of the farm, which has been in the family since the 1850s! Of course, the main highlight of Terawhiti is the wind turbines themselves. They began towering over us the closer we got, reaching over 100m up into the stormy sky above. For being New Zealand’s largest windfarm, it was surprisingly quiet standing out amongst them. I guess I expected these machines to make way more noise than the gentle humm they did as their arms appeared to spin with casual laziness.

Finished with the wind turbines, we drove the rest of the way through Terawhiti Station towards the Seal Coast where we got to see a real “wild” Seal Colony! Now although these creatures are obviously wild animals, there was nothing wild about them as they basked away quite the thing along the stony beach.

A few of them were kind enough to lift their heads in curiosity as we pulled up and got out of the van- giving us the perfect opportunity to snap a few pictures- but for the most part they were more or less disinterested in us!

On the drive down from the windfarm our guide pointed out where the Tasman Sea met the Pacific Ocean, before we got up close and personal with the Cook Strait. It was blustery down on the coast, and there was definitely something wild about standing at one of the Southern most points of Wellington, watching the waves churning angrily in the ocean before us, and crashing up over the leaning lighthouse clinging to a jut of lonely island rock far out to sea.

The lighthouse can usually only be seen from one of the ferries traversing the Cook Strait, and is one of the oldest and remotest lighthouses in Wellington. No longer a working lighthouse, I think we were all shocked and surprised when our guide told us that when it was manned, it was done so by one man who’d row out to it every night and morning to tend the fire for the light. Watching the stormy sea ahead of us, we could hardly imagine anyone surviving the trip out on a day like today never mind a truly bad one!

We were offered refreshments as we explored the immediate area, taking photos and trying not to get blown away. Alas, with the stormy weather, we weren’t able to see over towards the South Island but we did get to see loads of the fur seals which is really what we came down here for, so there were no complaints.

In Part Two where we visit Zealandia and make a cheeky-wee stop at the Garage Project Brewery for a tasting session!